Tuesday was my first real respite since July 13th. It's not like I've been housebound--I've been able to go to the grocery store and the library and for walks around the neighborhood. I've also been able to take Grandma places: to Michigan's for dinner, Grand Central for breakfast, and no fewer than six different ice cream shops. But to have sometime to myself, to take a real break--this was the first time for that. I had five hours.

I met Slip in Portland and we did a little high-end-can't-buy-anything-because-it's-all-outrageously-priced shopping. I guess you'd call it window shopping, even though we did go in through the doors. It's nice to see these beautiful things and wonder at the people who have the money to buy them.

Then we had a progressive lunch. First we had mole covered tater tots at Bunk with queso fresco and avocado. It was delicious, but about halfway through I started wondering where the tater tots came from--frozen, we agreed--and then Slip started wondering about the mole. We finished. There was no choice about that; like I said, they were delicious. I thought about them later and decided that was the last time I'd ever have them. 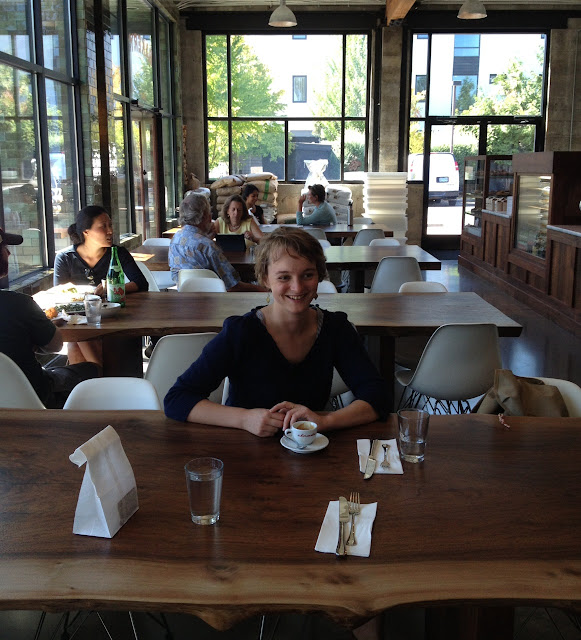 After this we went to Roman Candle and were overwhelmed by the beauty of everything. The pastries in the case, the menu, the amazing tables made from  Oregon Walnut… it goes on. After our second lunch stop--we shared a chickpea and kale sandwich which a pole bean salad (so much healthier than the first)--we made a stop at Townshend's Tea. Next, a quick trip to the fabric store where I could not figure out how much fabric I needed so left empty handed. I had a fun time with Slip; it was just what I needed, but I was running late so made a bee line for Woodburn.

I called and told the respite person, Debbie, that it was okay to go--I was on my way. When I got home Grandma was waiting in her chair for me to change her pants. She hadn't gone the whole time Debbie was there and waited (as much as she could) for me.